You Shoulda Killed Me Last Year 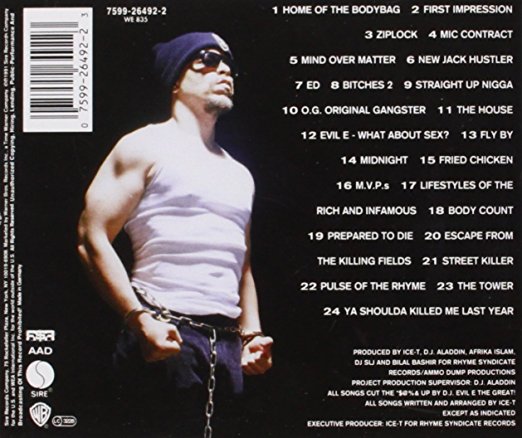 {Before I go, I'd like to say a few things
This album was completed on January fifteenth, nineteen ninety-one
By now the war has probably started
And a whole bunch of people have probably died
Out there in the desert over some bullshit
There's a war goin' on right now in my neighborhood
But I can't really determine which one's worse
I think the one that we are all fightin' is fucked up
And that's the war inside out brains, you know}

{But, uh, I feel bad about all the brothers
And sisters gettin' pulled right out of their neighborhoods
All the cities and small towns in America
That go over there and fight for that bullshit
That most of them don't really have anything to do with
So, I gotta send peace out to them
Also peace out to all my homies in jail
Brothers that are dead locked up right here on earth}

{Talkin' about the brothers in Solidad, San Quetin
All the way up to Pelicans Bay, Tracy, Chino
And all my homeboys out there in the East Coast lockdown facilities
I'm talkin' about Clinton, Rikers, Jolead
You know, every prison in the whole fuckin' world, man
That's like, you know, that's all bullshit, you know
They say slavery has been abolished except for the convicted felon
You'll need to think about that
That lets you know what the fuckin' constitution is really about, you know
A lot of my homeboys have been locked down
My whole entire career and that's some bullshit}

{So for them from the Rhyme Syndicate and Ice-T, I'd like to send
This special shout out, 'Fuck the police, fuck the F.B.I., fuck the D.E.A. Fuck the C.I.A., fuck Tipper Gore, Bush and his cripple bitch'
This is Ice-T, I'm out of here, told you, you should've killed me last year}