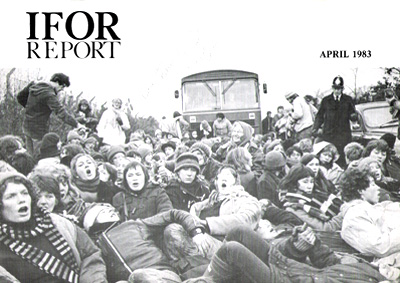 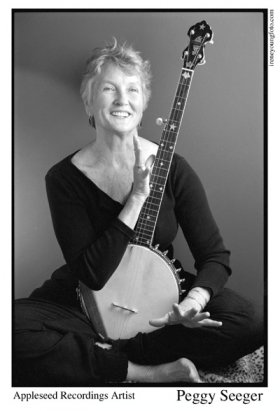 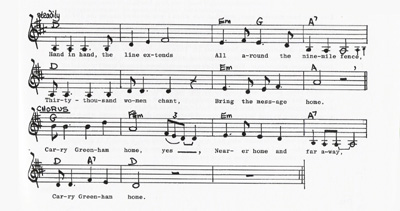 The tune is based on the Scots melody Mari's Wedding.

Hand in hand, the line extends
All around the nine-mile fence,
Thirty-thousand women chant,
Bring the messsage home.

Singing voices, rising higher,
Weave a dove into the wire,
In our hearts a blazing fire,
Bring the message home.

No one asked us if we cared
If Cruise should be stationed here,
Now we've got them running scared,
Bring the message home.

Here we sit, here we stand,
Here we claim the common land;
Nuclear arms shall not command,
Bring the message home.

Singing voices, sing again,
To the children, to the men,
From the Channel to the glens,
Bring the message home.

Not the nightmare, not the scream,
Just the loving human dream
Of peace, the everflowing stream,
Bring the message home.

Woman tiger, woman dove,
Help to save the world we love,
Velvet fist in iron glove,
Bring the message home.