Here At Greenham On A Spree [Layabout Song] 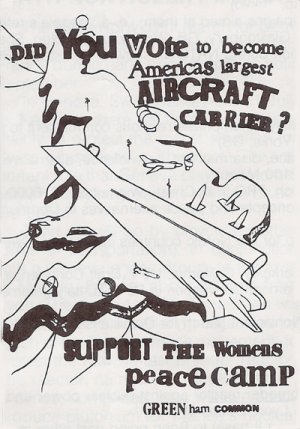 Author and composer: Gillian Booth.
Also published in the Chant Down Greenham songbook.
Movie: Ken Russell: In Search of the English Folk Song, 1997.
Lynne Fortt performing Down at Greenham Common on a Spree.

Spree: a period of extravagant activity.

Yuri Vladimirovich Andropov (1914 – February 9, 1984) was a Soviet politician and General Secretary of the CPSU from November 12, 1982 until his death sixteen months later.

Scud: Scud was first deployed by the Soviets in the mid-1960s.
The Gulf war
www.fas.org
Here at Greenham on a spree
financed by the KGB
dirty women squatters in the mud
mostly vegetarian
when we're not devouring men
foreigners and other forms of scud.

Mr Andropov supplies us with our vodka
Mr. Castro makes sure we're kept in dope
All the women here are Outside Agitators
who can't see that Mr. Reagan brings us hope

In the bushes the cache of guns is waiting
With sealed copies of Karl Marx in plastic bags
Our children here live miserably with rats and deprivation
but what can you expect from queers and hags?

Here at Greenham on a spree
financed by the KGB
laughing singing dancing in the rain
Nowhere signs of sacrifice
Making do or being nice
Most of all we're not accepting pain.