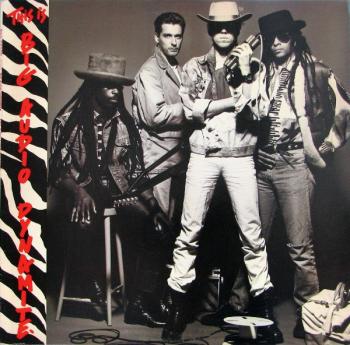 Tribal war a perfect plan for the one that damned the land
Since that ain't you or me tribal war continually
Mountain milk for mount nutrition send us some more ammunition
Never buy me ivy trade, let's go plug a hand grenade

Thank you boss for Red Cross
Apreciate good will
No no no, stomach for our loss
Yeah yeah yeah, I feel quite ill

Tarzan has come home again, heard the news diamond vein
Had to split no room to swing, Sun City wanted him to sing
Easy to see no unity, masses ruled by minority
When these guys come on the scene, ruined a good blues party

"I know I've heard the tune before"
I thought as I was kicked through the door
Something 'bout admission fee
But I was sure, house belong to me

White knight write our wrongs, lyrics for the protest song
Number one top of the charts, rock 'n' roll bleeding hearts
They offer us a special patch, knew there had to be a catch
Family tree pulled at the root, they still bear that old strange fruit

Plenty reason, plenty reason to be gum
Living by the gun down in a slum
Stake your claim blow by blow
Saw my pals go flying through the window

I know mister if it was you, it would be cut down like a flower
Some things never change, corporate crime gets free range
Only out for personal gain, grab the land and seize the power
What's all this about big game, don't you know the lions tame?