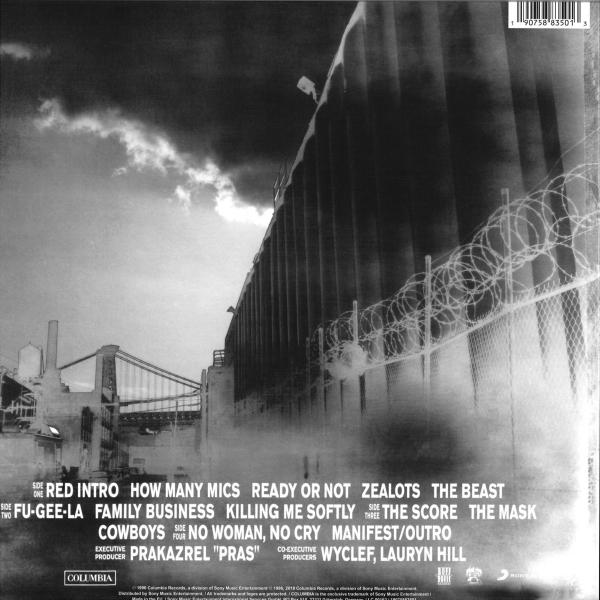 [Verse 2: Wyclef Jean]
Meanwhile the government brings Star Wars from Glock to glockers
C.O.P. has an APB out on Chewbacca
Mister Mayor, can I say something in yo' honor?
Yesterday in Central Park, they got the jogger (Okay, okay, okay)
Okay, let's get the confusion straight in ghetto Gotham (Mmhmm)
The man behind the mask you thought was Batman's Bill Clinton
Who soon retire, the roof is on fire
Connie Chung brung the bomb as it comes from Oklahoma (I'm just sayin')
Things are getting serious, Kuumbaya (My Lord)
On a mountain Satan offered me Manhattan, help me Jah-Jah
(Word 'em up)
(I can't sleep at night)
You can't search me without probable cause
Or that proper ammunition they call reasonable suspicion
Listen, I'll bring friction to your whole jurisdiction
You planted seeds in my seat when I wasn't lookin'
Now you ask me for my license, registration
Where the fuck do I work?
What the fuck is my occupation?
Well, I'm an MC, I'm down with the Fugees
Mother Mary caught a flashback like Rodney
Now the cops got Lolly

[Verse 3: Lauryn Hill]
The subconscious psychology that you use against me
If I lose control, will send me to the penitentiary
Such as Alcatraz or shot up like El-Hajj Malik Shabazz
High class get bypassed while my ass gets harassed (Bang)
And the fuzz treat bruhs like they manhood never was
And if you too powerful, you get bugged
Like Peter Tosh and Marley was (Yeah)
And my word does nothing against the Feds
So my eyes stay red as I chase crazy bald heads, word up (Ah)

[Verse 4: Wyclef Jean]
The chase is on, I feel like the bad guy
Fifth gear, 125 like New Jersey Drive (By)
Looked in my rear view mirror (Yeah)
Police was getting closer (Closer)
Heard a roar in the sky, looked up and saw the Blue Thunder (Shit)
My inner conscious says throw your handkerchief and surrender
But to who? The star spangled banner?
Oh, say can't you see cops more crooked than we
By the dawn early night, robbin' niggas for keys
Easy, low-key crooked military
Pay taxes up my ass, but they still harass me

[Verse 5: Pras]
The streets of corruption got me bustin and cussin' in the concrete jungle
Thoughts being dribbled like that tall kid Mutumbo
Handled by Hannibal
Suitable to be a fugitive like Dr. Kimble
(Ayo, should I slow down now?) Nah, kid, go faster (Why?)
Just 'cause they got a badge, they could still be impostors
Probable cause, got flaws like dirty drawers
Meet me at the corner store so we can start the street wars (Ah)

[Skit]
Yo, let's go to this next Chinese-Muslim joint
We could get some shrimp fried rice and make Salah at the same time
A'ight, cool
"You are not alone"
Ayo, ayo, Chang Wang, what's up?
I'll be right out
Right, right, one second
Okay, then, fine, your order
Alright, let me get, um
Let me get two of them beef fried rices over there
Let me get a half a chicken wing
Don't put that little, that little retarded leg in it 'cause (Right)
Cut, cut that off (Okay then)
Don't put no onions in my, in my white rice
Yo, yo, yo, I need four chicken wings fried hard and shit
What's this? Hold on? What's this?
The two of you? At once?
Okay, then, you want beef
No, no, we want beef to eat, we ain't got no beef
I want four chicken wings fried hard, nigga (Fine)
What the fuck is you talking 'bout?
Alright, I'll kick your monkey asses my fucking self
Woah, woah, what are you coming over the counter for, man?
Listen to me, you think I open a restaurant
In the middle of the hood and don't know what's going on? (Nigga, I'll)
I fucking represent (I'll fuck you the fuck up)
I will avenge my brothers by representing and whooping your ass, word is bond
Nigga, this ain't Channel 5, nigga (Okay then)
Somebody gonna die for real
I must show you Flying Fist of Judah (You ain't gonna show me shit)
That's right (I'ma show you these nuts)
You and you (Straight from Mortal Kombat)
You're just talking, obviously the two of you are just bitch-ass niggas
Nigga, well let's do something then, you talking this old bullshit
What's up? So what's up? (Okay then)
What's up, nigga? What's up, punk-ass?
Alright, this is a Chinese restaurant
But like Burger King, have it your way
Ah! Ah! This nigga here...