Promontory [Theme From the Motion Picture The Last Of The Mohicans] 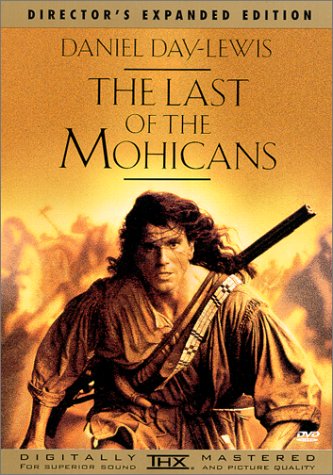 The film is set in 1757 during the French and Indian War, in which the British and French battle for control of the North American colonies. Though they are bound by law to aid the British Armies, many colonial settlers are reluctant to leave their homes along the frontier for fear of attacks by Huron Indians allied to the French.

The film opens with Hawkeye (Daniel Day-Lewis), Chingachgook (Russell Means), and Uncas (Eric Schweig), the last of an ancient tribe called the Mohicans, as they hunt down and kill a young buck deer in the forest. They then take the slain animal to the Cameron house, and join the Cameron family in their meal. Jack, a colonial militiaman, tells Hawkeye that he is gathering volunteers for the British army. The next morning, Jack and a group of other potential recruits decide to go to Albany to obtain terms from General Webb, who agrees to grant them leave if their homes are attacked. Satisfied with the terms, the volunteers travel to Fort William Henry.

At the same time, Cora Munro (Madeleine Stowe) and her sister, Alice (Jodhi May) are traveling to Fort William Henry, north of Albany. They have received word from their father, Colonel Edmund Munro, to meet him there. A native guide, Magua (Wes Studi), has been sent to escort them and a detachment of 18 British soldiers, commanded by Major Duncan Heyward (Steven Waddington). On the trail they are ambushed by a small Huron band. Magua himself initiates the attack. All the soldiers except Heyward are quickly killed, before he, Cora and Alice are rescued by Hawkeye and his companions. Magua, subtly preparing to shoot Cora, is interrupted by Hawkeye and escapes into the forest. The Mohicans agree to escort the survivors to Ft. William Henry. Along the way, they discover that the homestead belonging to the Camerons has been razed and burned and everyone has been killed. Hawkeye also mentions to Heyward about Magua attempting to shoot Cora, mentioning a likely blood feud between their families, but Heyward dismisses the idea as nonsense.

When they arrive at William Henry they find that the fort is under heavy attack by French forces. They manage to sneak inside and Munro scolds his daughters for joining him. They realise that the message Munro supposedly sent to Alice and Cora was misrepresented by Magua. They surmise he intended to stop Munro's request for adequate reinforcements reaching General Webb, ensuring the fort would fall. Munro gravely tells Heyward that the French are quickly approaching mortar range and that the fort can only hold out for three more days. Their only hope is to get another messenger through to General Webb and again ask for reinforcements. Hawkeye and Uncas create cover for the messenger as he makes his way through the French picket line, shooting down Indians and Frenchman at distances of over 500 yards.

Munro is confronted by Hawkeye, who tells the Colonel that settlements are being attacked by Ottawa war parties. Hawkeye demands that Munro let the colonials aiding in defending the fort return to their homes, as previously agreed. Munro refuses and Hawkeye agrees to cover for Jack and his other friends so they can leave the fort. Hawkeye is arrested for sedition and sentenced to hang.

Several days pass without reinforcements. As the fort is on the verge of falling to the French, their commander General Montcalm orders a ceasefire to meet Munro and offer him surrender terms. He and his remaining soldiers and their families are offered safe passage to Albany, on condition they return to England and no longer fight in the war. Munro reluctantly accepts, after reading a message intercepted by the French that Webb will not send any more men to his aid. However, although knowing Munro would keep his word as a soldier and gentleman, Montcalm also knows the British High Command would overrule him, so he informs Magua of their route.

As the British march back to Albany, they are attacked by Hurons, led by Magua. Munro himself is killed by Magua, who, just before cutting out the Colonel’s heart, promises to kill his daughters so his family line will not continue. This was his primary goal all along. Magua’s village had been destroyed years earlier by British soldiers led by Munro, causing the end of his own family line through the death of his children and his wife marrying another man after Magua was taken as a slave, as she believed he was dead.

Hawkeye, Cora, Alice, Uncas, and Chingachgook, and two British soldiers, escape with Heyward to a cave behind a nearby waterfall with Magua close behind. With all their gunpowder wet from their escape down the river, Hawkeye realises the only way everyone will survive is for the Mohicans to escape, thereby avoiding an impossible fight and allowing the others to be captured alive. They will then be taken to the northern Huron lands, where the Mohicans can easily track them and rescue them. Heyward calls Hawkeye a coward, as he and the two soldiers intend to fight. Hawkeye, Uncas, and Chingachgook make a dramatic leap into the waterfall. The Hurons arrive shortly after, easily killing the two soldiers and incapacitating Heyward.

Alice, Cora and Heyward are taken to a Huron village. Hawkeye, Uncas and Chingachgook follow them. Magua demands recognition from the high chief Sachem in exchange for Heyward (to sell back to the British) and the Munro sisters (to be executed). The meeting is interrupted when an unarmed Hawkeye approaches, running the gauntlet in order to earn safe passage. With Heyward translating into French, Hawkeye convinces the chief that Magua is acting according to his own selfish plans rather than following Huron tradition. The chief agrees and decrees (in Huron, preventing the others from fully understanding) that Cora will be burned alive, Magua will take Alice as a wife (allowing both bloodlines to continue) and Heyward will be returned to the British. Hawkeye is given respect and safe release, but demands that he be sacrificed in Cora’s place. Heyward, out of new respect for Hawkeye and love for Cora, deliberately mistranslates, offering himself instead. The chief accepts and Magua curses him and leaves with Alice and his men. Uncas, who has been watching from a distance with Chingachgook, follows on his own to rescue Alice, whom he has fallen in love with and mistakenly believes is being led away to be killed. Cora is given to Hawkeye and Heyward is tied up to be burned. At a safe distance beyond the village, Hawkeye delivers a mercy shot to Heyward, ending his suffering in the fire. The two meet up with Chingachgook and follow Magua to rescue Alice.

Uncas is able to head off Magua and his band. He quickly kills several men before engaging Magua. Although the two seem equally matched, Magua, as the more experienced fighter, quickly gains the upper hand. The other Mohicans regain sight of their enemy just as Magua stabs Uncas in the throat and throws his body off a cliff. Alice, already traumatised and realising Uncas' died out of love for her, then throws herself from the cliff, despite a half-hearted (but genuine) offer of mercy from Magua. Hawkeye and Chingachgook catch up, killing several of Magua’s scouts. While Hawkeye holds the last men at bay, Chingachgook engages Magua in hand-to-hand combat. Deliberately inflicting many vicious but non-fatal blows, Chingachgook slowly and painfully kills Magua.

The last scene of the film shows Chingachgook and Hawkeye engaging in a spiritual ritual. With the death of Uncas, his one blood relative, Chingachgook names himself 'the last of the Mohicans'.