War Is Not Healthy 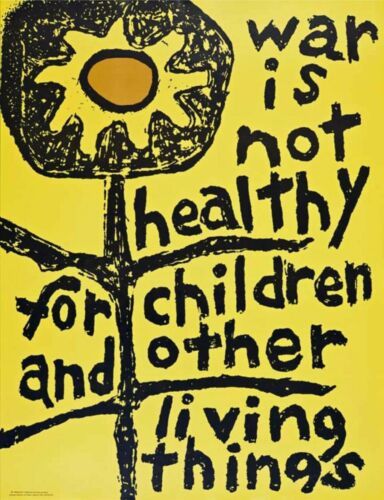 Lorriane Schneider (1925-1972), a doctor’s wife, mother of four and printmaker, created one of the most emotionally charged posters of the Vietnam War era out of concern that her eldest son would be drafted into the army. At the time, given Lyndon Johnson and General William Westmoreland’s increased troop build-up, one need not be a fortune-teller to predict the inevitable consequence. But when the poster was issued in 1967, few could foresee that Schneider’s petition for peace would become the ubiquitous anti-war icon it was then or is today, almost 40 years later.

In 1967, Schneider entered a small print titled “Primer” to a miniature print show at Pratt Institute in New York. The only entry criterion was each submitted work could not exceed four square inches. With the war uppermost on her mind, Schneider made what she called her own “personal picket sign”, recalls her daughter Carol Schneider. And because she had to work in such a tiny format “It had to say something, something logical, something irrefutable and so true that no one in the world could say that it was not so”, explained Schneider in a 1972 address before the United Nations Conference on Disarmament in Geneva, Switzerland. Since it was the "flower power" era, she drew a sunflower and surrounded it in roughly scrawled lettering the phrase “War is Not Healthy for Children and Other Living Things”.
“The flower was a very recognizable symbol of hope in the days of despair”, explains Carol in a recent Voice interview, “and the childlike printing expressed the obvious truth dancing on the four branches, I think representing the four of us kids”.
When initially conceived, however, Schneider’s image was not intended as a placard, no less the logo for the movement that grew up around it. It was not until TV producer Barbara Avedon gathered together 15 middle-class women on February 8, 1967 to discuss ways to protest the war did Schneider’s image find its true and enduring purpose. As Avedon noted in a 1974 catalog of Schneider’s work: The women were reluctant to go the bearded-sandaled youth or wild-eyed radical route, yet they were chomping at the bit to let the U.S. Congress know how enraged they were in the face of mounting body bags.
The group decided to send 1,000 “Mother’s Day cards” to Washington as letters of protest. According to Avedon, the card said “in very ladylike fashion ‘For my Mother’s Day gift this year I don’t want candy or flowers. I want an end to killing. We who have given life must be dedicated to preserving it. Please talk peace.’” This group of ladylike ladies launched “Another Mother for Peace,” which eventually became the vanguard of a surging protest movement. 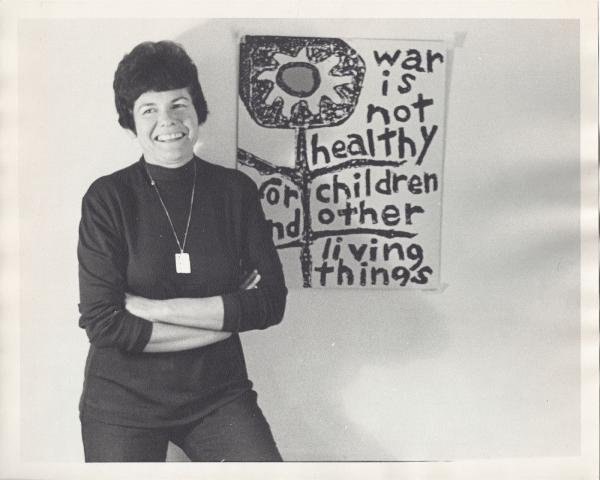 
“My mom would have probably been more of an activist if she didn't have four kids to care for,” adds Carol Schneider. “She really admired some of the loud and rebellious people of the ‘60s and encouraged us to listen to them.” Indeed images of civil rights demonstrations and abuse in the south had long haunted her, and the Schnieder family frequently hosted the "Freedom Singers" before embarking on the freedom rides. As a consequence, Carol Schneider recalls that in 1964 “we had ‘kike’ and a swastika burned on our lawn by our patriotic neighbors. But we weren't afraid”.
Some poster historians (including myself) have referred to "War is Not Healthy" as "amateur" by graphic design standards. Despite its ubiquity and timelessness it still lacked the rage, if not the polish, of other anti-war posters that were wrought with sardonic and satiric messages, Schneider's work was like a piece of folk art. Yet Carol insists "She didn't just scribble it out while waiting in line at the market. I have never heard of her referred to as an amateur, and feel it is an inappropriate and somewhat devaluing label. To me, that is like someone telling my father that he is an 'amateur' because he is an anesthesiologist, not a surgeon." Although Schneider was not a trained graphic designer, she was a professional artist and this image, born of passion and conscience, transcended petty formal definitions. What's more, rather than the typical protest art, "She saw her image as very positive and inclusive – after all it is hard to disagree with her words," adds Carol Schneider.
The poster further posited a key philosophical idea Schneider proposed at the Geneva conference: “Man will learn to resolve his inevitable difference through non-military alternatives. But it is up to us, the artists, the people who work in media, to prepare the emotional soil for the last step out of the cave. We can create symbols of the new day and light the world with our hope and the Neanderthals that attempt to restrict our freedom of expression, that attempt to frighten us into silence, that give you only four square inches with which to cry out your anger-use it”.

"Another Mother for Peace" had such remarkable success in reaching across political and party lines and swaying popular opinion against the Vietnam War in large part because of the universal appeal of Schneider’s words and image. “Women who had never before even considered expressing their views or protesting wore the necklace and displayed the bumper sticker with it”, asserts Carol Schneider. “Rural farm wives and soldiers’ mothers, as well as veterans (there was a bumper sticker "Another Veteran for Peace") found this statement true to their feelings, communicating the most basic argument against war”.
Schneider went on to produce several more anti-war images, including "Sardine Tin General," an intaglio print. The plate was built up using scraps of metal, run through the press to create an embossment, and inked. Over the marching tin general with a sword are the words "Juden Verboten," and under that, "Earth, conceal not the blood shed on thee." Another startling anti-war print called "Lottery" was comprised of several segments, each with a scene from WWI, the last war when the United States used a lottery draft prior to Vietnam. It was constructed with a knob over the center, under the frame, so it spins. Some were actually framed in "plotting map" frames, which she got at the army surplus store. Ironically, but poignantly, plotting maps were used by the military to plan bombing missions.
Today, this same magnetism continues with Cindy Sheehan, who single-handedly spawned a peace movement this past summer. “No mother wishes to lose a child, especially in a battle over ideology, and when they do, the grief can be both paralyzing and a force for mobilization”, says Carol Schneider. In anticipation of the September 24 march on Washington “Another Mother for Peace” sent packages to Sheehan. Sheehan is wearing the necklace with Schneider’s design on her cross-country bus trip to Washington D.C.

Schneider was diagnosed with ovarian cancer and died in 1972 at the age of 47. “I am sure if she lived longer, her work would have continued to reflect her strong views for peace and social justice”, her daughter says proudly.
War is not healthy
for adults and children
It scars and it maims,
it blames and it kills them
War is not healthy,
and no-one should claim
The pain that's inflicted
could be worth the gain

It's money in the pockets of the armament makers
It's fame and it's glory for the generals and dictators
It's terror and shame and real human suffering
For the ones who lose most are the ones who have nothing
It's democracy, it's lunacy, it's history, it's victory

It's democracy, it's lunacy, it's history, it's victory
It's armchair warriors sucking their gums
It's merchants of horror polishing guns
It's praising the troops and waving the flag
It's widows and orphans carrying the bag