Our Prayer For Peace

"OUR PRAYER FOR PEACE" by James Walker with The Dixie Hummingbirds, 1964 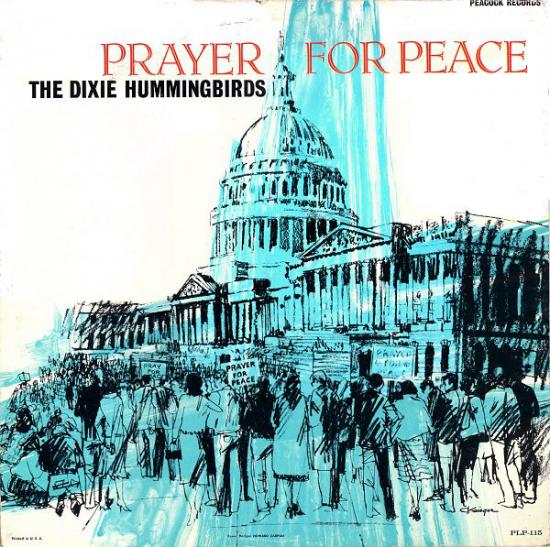 ( Testo trascritto da S. D. )
When we pray, we like to include these words,
Lord teach us how to love each other
Every creed, Father, and every color
Let every man know, Father, let them know that it is a sin
To hate his brother because of the color of his skin

Oh Lord, I want you to guide our mind and soul
Lord, keep idle hands from doing anything that is wrong
Oh Lord Jesus, I know you're able to let all hatred cease
Teach us how to love and live together, Father, in perfect peace, oh Lord

If we could just get everybody to understand
That Jesus died, to save us all
He said, together we will stand and divided we all will fall
Lord oh, c'mon let all this hatred cease
Teach us how to work and go to school together, Father, in perfect peace

[black & white film clip begins in the middle of a verse. I don't know what they are singing. It's something about Noah]

Noah was glad when the rain stopped dropping

1:12 conversation in color] -Members of The Dixie Hummingbirds reminiscing (remembering the past)

first man - I try to remember a song we did some time ago about praying for peace.
second man – Prayer for Peace?
first man – it was called “A prayer for tomorrow” at that time.
second man – Oh. Yeah.
first man – And then when I came to the Hamenburg I changed the title.
and the words.
Yeah, and ah when President Kennedy was assassinated, I think it was on Friday. I I think.
third man- Yeah
first man- Yeah
That Saturday, I wrote a verse about the uh assassination. And we were in, we were in Jamaica, New York.

1:41 shows a black and white film clip of the Dixie Hummingbirds singing “Our Prayer For Peace”

[The first man is heard saying- And boy when I did that verse, people were really going wild because it had just happened.

1:52- [In the black and white film clip, the first man is speaking while the other member of the group hum, clap, and slap their sides to the rhythm]
There was one thing that happened
that shook up the nation
In 1963. We all know it was on the 22nd of November.
TRAGEDY that happened way down in Dallas, Texas.
Ooooh, I do believe the whole world will forever remember.
Listen, President Kennedy, one who fought so hard for the human race.
By the hands of a mad evil man he killed Kennedy
He’s sleeping cold in his grave.
He was only trying to tell the world this

He said, Gather come along
Gather peace while it is time
God said to -------
Ooh, Jesus!
And Ooooh our Father
Let all the hating cease
Lord, if it’s Your will
Let us work for peace together, Lord
Let us all go in peace.