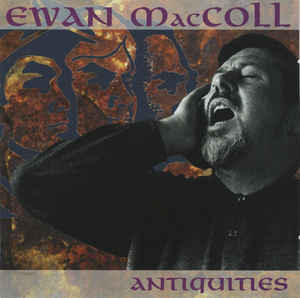 On the tune "The Garden Where the Praties Grow"

Peggy Seeger's Notes: Ewan had an odd attitude towards grocers. It might have been due to his own poverty- stricken childhood when his family was continually in debt to the local grocer; or perhaps it was the rumour that the present royal family can be traced back to a grocer who made his fortune by victualling Napoleon armies...no matter. Margaret Thatcher's father was a grocer and Ewan wasn't about to let her forget it.

Testo trovato su mudcat.org
Come all you argumentative sods who like to chew the rag,
Who'll stand at a bar hour after hour on a beery talking jag;
Sit down and park your feet awhile and give your mouths a rest,
And I'll tell you about the dame they call the "Guardian of the West."

Her hair was the best that money could buy; her eyes were china blue;
I swear they wouldn't 'a' looked out of place on a frozen cockatoo.
She'd a nose like the blade of a metal saw, a voice like a tungsten drill.
She used it to bore the natives when she'd a couple of hours to kill.

When she was a puking babe in arms, she read in a magazine
About the royals and decided then she'd like to be the Queen;
But the job had already been taken, so she stamped her foot and said,
"If I can't be the Queen or the Prince of Wales, I'll he the PM instead."

And so she moved from NW4 to a pad in Downing Street,
A well-found joint where she and a hunch of deadbeats used to meet;
And they'd all dance round the table, then have a cosy chat;
And in between she'd practice her elocution on the cat.

The lady often said she'd like to have lived in the Golden Age,
Before the days of the unions and the National Minimum Wage;
And she sighed when she thought how Hitler had smashed them all to hell;
"What he could do I can do better," she said, "and probably twice as well."

And so she set out on the job of castrating them one by one,
All except the E.T.U. and that had already been done;
Teachers and civil servants and workers down the mine
Needed a taste of the lady's whip to make them toe the line.

The printers they came out on strike and she went for them tooth and claw,
Nurses and firemen struck as well, she belted them with the law;
They may be gallant heroes when they're saving people's lives,
But they're just a bunch of layabouts when they're asking for a rise.

Well, the lady's reputation plummeted down into the red,
But trouble blew up in the Falklands, it was jam on her gingerbread;
"Thank God for a nice little war," she said, "this is Britain's finest hour!"
So a couple of hundred swaddies died so she could stay in power.

The day a Polish shipyard became a casualty
She rushed to see Lech Walesa, crying "Solidarity!"
"O stay with us, my love!" he said, but she answered with a frown:
"I've got to rush hack to Glasgow, dear, to close a shipyard down."

She doted on brave Colonel North and all that he represents;
And she stuck like shit to a blanket to her favourite president;
And she's madly keen on Bushy-tail of the dear old C.I.A.,
And she carries a torch for Botha and General Pinochet.

Once behind the counter in her father's grocer shop,
She sold butter and jam and flour and Spam and everything else, the lot;
But now the merchandise has changed, old prices don't apply;
She's selling the nation off in lots to all who want to buy. 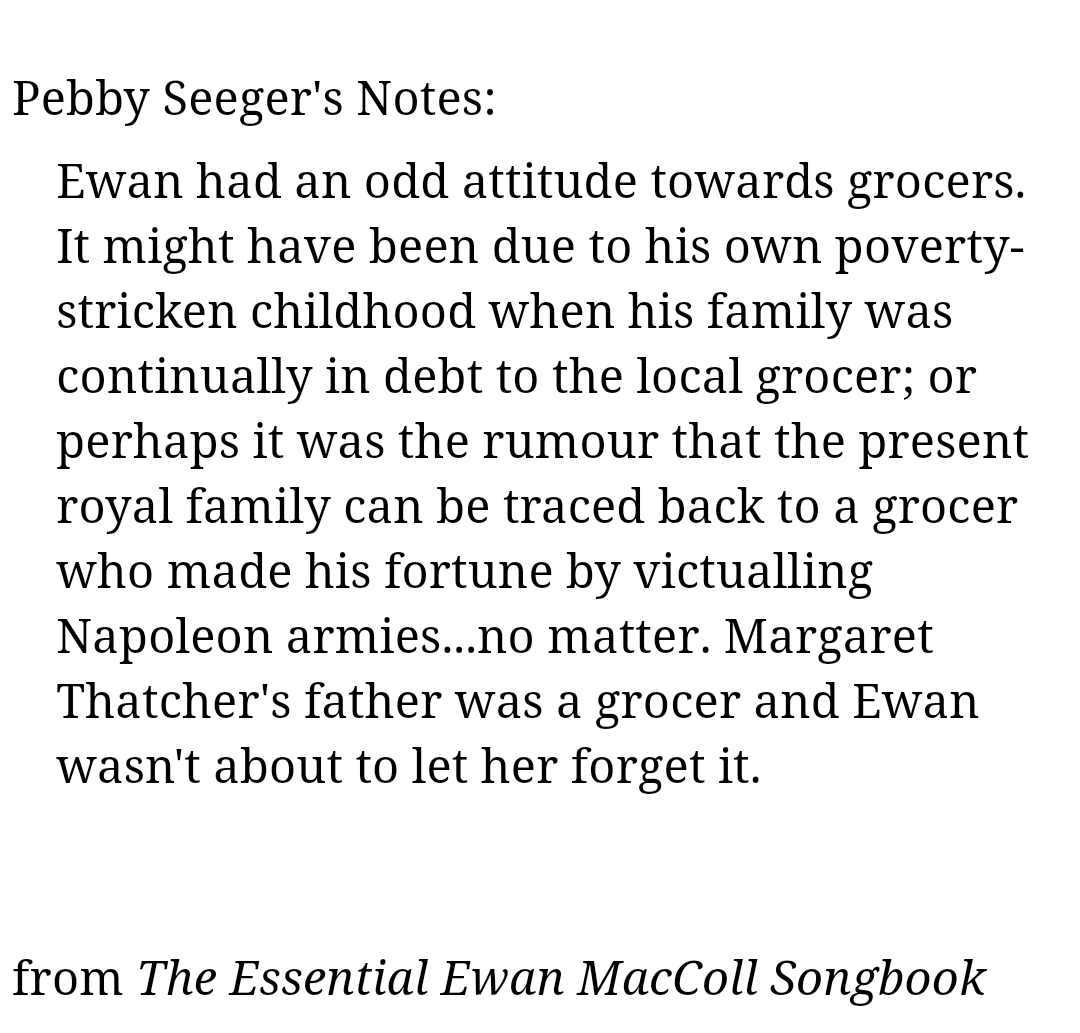