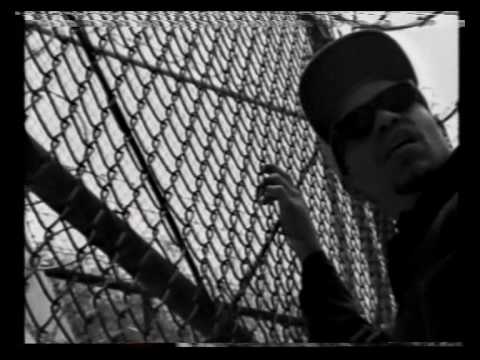 I'm rollin' up on an old grey bus
And I'm shackled down myself that's who I trust
The minute I arrived some sucker got hit
Shanked ten times behind some bullshit
Word in the pen the fool was a snitch
So without hesitatin' I made a weapon quick
Found a sharp piece of metal taped to a stick
Then a bullhorn sound that means it's time for chow
My first prison meal the whole feeling was foul
It wasn't quite my style but my stomach growled
So I washed the shit down and hit the weight pile
The brother were swole the attitudes was cold
I feel the tension on the yard from the young to the old
But I'm a warrior
I got my ground to hold
So I studied the inmates to see who had the power
The whites, the blacks or the gun tower

In a blink of an eye, a riot broke out
Blacks put their backs to the wall
"Cause it was north and south
A gunman shouts and everybody had doubts
Until the bullets started flyin' took two men out
Then they rushed everybody back to their cells
I'm in a one man cell I know my life's on a scale
I wonder if that gunman's goin' to hell
This is my second day I got a ten year stay
I learned my first lesson in the pen you don't play
I seen a brother kill another 'cause he said he was gay
But that's the way it's been that way for years
When his body hit the ground I heard a couple of cheers
It kind of hurt me inside that they were glad that he died
And I ask myself just who had the power
The whites, the blacks or the gun tower

You see the whites got a thing they call white pride
The blacks got the muscle Mexicans got the knives
You better be wise you wanna stay alive
Go toe to toe with the sucka no matter what size
A fool tried to sweat me actin' like he was hard
I stuck him twice in the neck and left him dead on the yard
It was smooth how I did it 'cause nobody could see
With my jacket on my arm and my knife on the side of me
Bam bam, it was over another fool bites the dust
I went crazy in the pen with nobody to trust
I'm benchin' ten quarters, so I'm hard to sweat
Used a tat gun, and engraved my set
They call me a lifer 'cause I'm good as dead
I live in the hole, so the floor's my bed
And I ask myself again who has the power
The whites, the blacks or the gun tower