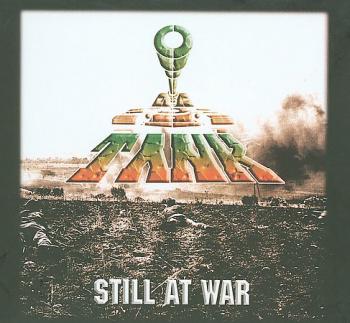 The New Wave of British Heavy Metal era is considered one of the most controversial movements in the whole history of metal. One of the most influential formations which emerged in the beginnings of the N.W. .O. .B. .H. .M. madness was TANK - a fierce, ambitious young band, taking all the best that was in punk and metal to a higher level. In 2002 Tank released their latest album, entitled "Still at War", which was a truly memorable comeback for the band. Produced by Algy Ward himself, the album featured a set of classic, powerful tracks, which instantly won the hearts of die-hard fans, who often compared it to the band's best effort to date, "This Means War". Members of Tank themselves seem to be satisfied with this record as well. Musically, the album was indeed a comeback to the roots of N.W. .O. .B. .H. .M. and remains one of these unique records which, although recorded in contemporary times, still have that characteristic feeling of the 80s metal scene. "Still at War" remains the last, but also one the greatest albums Tank has ever recorded. New digipak edition includes 2 bonus tracks and is limited to 2000 copies. Digitally remastered using 24-Bit process on golden disc.

There they stand – our fine leaders all,
While they're together... has any one thought to talk...
There's no plan. Crisis? Not at all..
Their own existence relies on a horse to stalk...
While they're backbiting
an air strike, like lightning – engage!

Uncle Sam, this one's too close to call,
You're under pressure, from Israel's wailing wall,
Insane sad man, –your flag's about to fall
The world is indifferent to your pleas for food for oil
Hatred inciting a no-fly zone siting... engage!