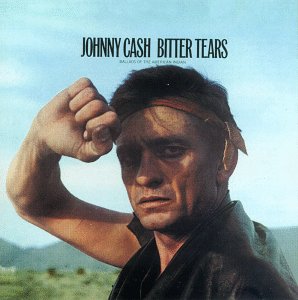 With "The Talking Leaves" Johnny Cash enlightens the listener by portraying the story of "Sequoia", the Cherokee Indian who is accountable for a lifetime of hard work and commitment in bringing the Cherokee alphabet to his people.

(Talked)
Sequoia's winters were sixteen - Silent tongue spirit clean
He walked at his father's side
Across the smoking battle ground - where red and white men lay all around
So many here had died..

The wind had scattered around -snow white leaves upon the ground
Not leaves like leaves from trees
Sequoia said what can this be what's the strange thing here I see
From where come leaves like these.

Sequoia turned to his father's eyes -and he said father you're wise
From where come such snow white leaves
With such strange marks upon these squares
Not even the wise owl could put them there
So strange these snow white leaves..

His father shielding his concern - resenting the knowledge Sequoia yearned
Crumbled the snow white leaves
He said when I explain then it's done - these are talking leaves, my son
The white men's talking leaves.
The white man takes a berry of black and red
And an eagle's feather from the eagle's bed
And he makes bird track marks..
And the marks on the leaves they say carry messages to his brother far away
And his brother knows what's in his heart..

They see these marks and they understand the truth in the heart of the far off man
The enemies can't hear them
Said Sequoia's father son – they weave bad medicine on these talking leaves
Leave such things to them
Then Sequoia walking lightly followed his father quietly -but so amazed was he
If the white man talks on leaves -why not the Cherokee ?
Vanished from his father's face - Sequoia went from place to place
But he could not forget..
Year after year he worked on and on - till finally he cut into stone
The Cherokee alphabet
Sequoia's hair by now was white - his eyes began to lose their light
But he taught all who would believe
That the Indian's thoughts could be written down
Just as the white men's there on the ground - and he left us these talking leaves..