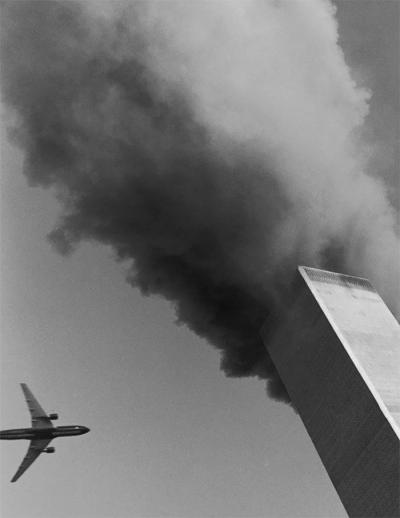 See also Twisted Sense Of God (pt. 2)
I was talking to my assistant a couple of months back, and while we were talking about the obvious differences in men and women, I had to give up and say that men couldn't handle the period cycles that women go through. She countered and told me that men do have periods . . .

There's little words that can describe what happened here in the United States on Tuesday September 11 2001. I was in New York when it was goin down. My heart goes out to those in the aircrafts, the buildings, the rescuers killed on the ground. As a person who has traveled across 40 countries in the world, I can attest to the fact that the common peoples on the earth have long suffered, and swallowed the bullet of the greed of governmental rule and arrogance. Power is a funny thing, when poured on the few individuals that are selected to govern people, no matter where they're at on the earth... it makes manipulation a close cousin.

Mad questions abound. Whoever the so called hijackers or planners answered to, my question is how come their superiors didn't put THEIR lives on the line? I don't buy religious martyrdom if the leader heads themselves can't get in the same box. It's problematic when one is trained and taught to die for religious elevation while the heads of that structure are rich as hell and don't share the wealth with their followers. On the other side, the United States is talking war but who is actually gonna fight those battles, and with whom?

War is not a football game, y'all.

The skeptical pendulum is swinging both ways as far as culprits are concerned. I have a problem with dragging innocent people into political high level bull shit. There will be innocent people catching it bad across both waters, infested with a lethal combination of fact, attacks, myth, dogma and orders.

I have a problem with Amerikka walking out and damn near shitting on the WORLD RACISM CONFERENCE in SOUTH AFRICA. I have issues with the United States talking cocky, considering while admitting themselves about the carrying out of assassinations. I have a problem with heartless cats training to fly planes in order to kill thousands of innocent people in the air or on the ground. I have a problem with some nations and it's protectors how they refuse to acknowledge their major contribution to this cycle of terror and greed. I have a problem that Americans consider it a over there issue, as if it was on another planet. I have a problem with Amerikka with three K's, and it's relentless hyping and macho barroom talkes of a 'beat-u'down' past. I don't have a problem on what America can be. In NEW YORK a place known for people not giving a damn about the next person, all of a sudden people are communicating with one another regardless of background unless the person has a Middle Eastern 'visual characterstic' and that's where Amerikkka, that's with three K's, and not America spelled properly, rears it's ugliness. Understand the difference y'all... Twisted.

Why everybody wanna kill God? It's wack when people oblivious to the facts are dragged into war and death. It's wack when cats throw religion into the mix. It's wack that celebrations are taking place in the streets of some nations and just as terrible as some Texans shooting and burning a mosque in Abiline. Just as horrible is the fact that Amerikkkans jumped in celebratory joy when two atomic bombs were dropped on JAPAN in 1945, and updated hate in 2001 about people calling people of backgrounds 'dogs' it's documented. I can go on and on and on about the inner and outer, and still continued 'terrorism' endorsed Amerikkkan that's with three K's style, as eloquently pointed out and covered by my man Art McGee's Black Radical Congress piece. Terror Attacks. Ignoring calls for reparations, only endorses a past of slavery, KKK, COINTELPRO, Japanese WW2 concentration camps etc. etc. that's been hosted here in the same land of the free everybody's talking about. When it all boils down to it, power has never been with the people. The people of the earth are still PAWNS IN THE GAME, while the boardmasters, the rulers of countries, corporations, giant and religious leaderships operate under the guise of 'IN GOD WE TRUST' or even 'ALLA U AKBAR' where an action assumes the position of an act of God. It's not what you say you are, it's what you prove you are. So avoid this latest rhetoric and arrogance that's woven with this 'twisted sense of god', while the everyday person is shook by a new existence in this odec, this centruy, this millennium.

On the real, in all sense of humility may god bless us all beyond the flags.

Why y'all wanna kill God?

A twisted sense of God.