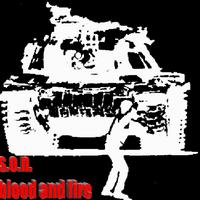 I've been observing this system at every level
and every rebel refusin' to settle be catchin' metal, -I swear
they sit back and revel in all they devilin' with all they foreign country meddlin',
pot callin' the kettlin',
Mass destruction weapon peddling just let it settle in,
they ain't been fightin' fair since Chris Columbus nestled in.
That genocide amplified
and supplied
by States using religion as a tool to divide by.

I pledge by the razor's edge to challenge the balance of power that's devoured our life's bread (empowered by bloodshed) this fight's lead to the same thing that my strife's wed,
this movement for justice that's as raucous as it's widespread,
sanctions to occupation, globalization
to organization of anti death penalty mobilization,
we come correct in every situation
supporting workers striking to improve conditions at their occupations.
We come more better with each and every endeavor to be free
from the fetter of a life pursuing the cheddar you can bet I stays clever
with the letter regardless of weather forever
touching the organ that's under your sweater (yall)
I stays nice with the letter yall ¬echo/ I rock the device to set it off

They say get back,
we say fight back (cause)
we wouldn't take it if they did us like they did Iraq.
(x4)

I'd walk- to Iraq-to-rock together
with a mother from over there who's fighting to get a-better
way of life that's free from the strife and the pressure
that comes with living under the hand of a foreign oppressor ¬
they're in the streets
fighting the beast
demanding the right- to run their country how they please
the war abroad connects back to the war at home,
they give tax cuts to the rich but lay us off and send us home,
if you resist then their tapping your phone,
cracking and snapping your bones,
and calling it legal with the patriot act and it's clone. ¬
It don't matter who's in presidential position from Nixon to Clinton
it's the people providing the friction,
fuck a politician,
spitting dishonest diction,
and nuff respect to people that be separating the fact from the fiction,
we're on a mission ta,
widen the schisms of, capitalism and replace it with a system thus, for the people,
by the people,
of the people,
not the evil.

They say get back,
we say fight back
'cause we wouldn't take it if they did us like they did Iraq.
(x4)

If we die by the same rules we ride by,
then how many leaders of countries would catch a drive by?
You and I know ¬how-far-they'll-go
when it ain't the blood of their own their causing to flow.

Money for jobs and -education,
not for war and -occupation (x4)

That's bullshit, get off it,
this war is for profit,
war and occupation will never bring liberation…