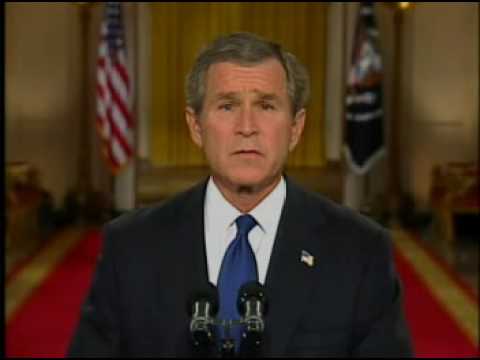 produced by:
FredWreck
[hook: FredWreck (KRS One)]
Dear Mr. President (yeah)
The world has gone astray (hear that?)
Brothers are dying (what?)
They won't live to see today (live to see another day though)
Was it all worth it (was it?)
You had to lie to get your way (look at you, look at this)
Blood's thicker than water (that's right)
What a price we had to pay (look at the price now)
Dear Mr. President (yo)
You and your friends you all are crooks (look at y'all, look at this)
Sellin' out the poor man (uh-uh)
The soldiers' lives are took (look at that now)
I can't see no difference (uh-uh)
From Mr. Hussein to Mr. Bush (look at this)
Death and deception (uh-uh)
It's the brew the devil cooks

[Defari]
Dear Mr. President, you had a vendetta
Get Saddam by any means and make mad cheddar
In four years you grow 600 million
(The Bush family)
Oil tycoons, they're worth billions
You even pissed on the public for the cash
You started a deadly war and hiked up the gas
That's 'cause your real paycheck comes from OPEC
Do the Bin Ladens also send endorsements?

[KRS One]
K to the R to the S to the One
My condolences to those that lost their son
Maybe lost their daughter, when the crossed them borders
Baby I'm here for ya, it's the New World Order
Times gettin' shorter, while them crimes get longer
I'm hot in the sauna when I blow low on ya
I'm in California while I'm on every corner
KRS, FredWreck, never say we never warned ya
Conscious lyrics, it's time for a little bit
You hear how I'm spittin' it, no one is innocent
East coast oppression yeah, the west coast is livin' it
West coast oppression yeah, the east coast is givin' it
Every time we say that dash cash, we gettin' it
Every time we diss our future with our kids in it
Every time we push the fly rise they slaven ya
Soon we'll be rappin' for Saudi Arabia

[Prodigy]
I told ya'll niggas it's a war outside
But these niggas don't listen 'till the missiles start to fly
America ain't nothin' but the fantasy life
But the end'll soon come for this bull shit life
Hold up before that come, I gotta get mines
This money is all that matters at the present time
Fuck a war in Iraq, I want to survive
Right here in the hood, in these New York times

[news reporter (sample)]
Through a deadly suicide car bombs
And the Iraqi patrol was dirty
And one of those attacked another soldier from car...
Baghdad, American soldier has died

[Evidence]
War, we all enlisted (yeah), business and pleasure?
The next ex-pres don't know the difference
Strategic plannin', my city's in panic
Propaganda spread, the truth's kept candid
When push comes to shove and shove to push
We in the same corner sayin' "Buck Fush"
It's Evidence, they'll remember the name
It's FredWreck, west coast, legends of game

[Mack 10]
I already got enough on my mind to be stressed
And now I can't even watch the news, it's depressin'
I see 'em battle through Saddam's hood with Smith and Wessons
And droppin' all kind of bombs with aggression
Mama just stand my prayers for someone to hold ya
While I pour out some Louis for the fallen soldiers
It's best to turn to the Lord for he's the best to consoled ya
And that's the realest thing Mack 10 ever told ya
It didn't have nothin' to do with no dime on the Crippin'
Them dudes lost their lives overseas pistol grippin'
Sendin' youngsters to Iraq to leave blood drippin'
They wanna lock up all my homies for sad trippin?
(last four lines repeated)

[WC]
Dear Mr. President, I ain't hesitant, I fly this kite up
On behalf of Gary G, I'll fill you up with my raise of debt
Blue collar tax-payers, Henny drinkers
I'm holdin' my nuts in the ghetto, giving you the middle finger
Fuck war, for years we have been ignored
And when it's time for war, it's the only time you fuck with the poor
Land of the free, but I don't see no sunshine
Just niggas and latinos on the front lines, United States? nah, United Snakes
Where they cast the black folks out and our votes don't count
But we still keep pokin' 'em try to vote, but like the Public Enemy logo
You keepin' niggas in the sniper scope, make me throw my hands up and wanna holler
Bush gettin' power, all of a sudden go down the twin towers
Daddy must have passed the word down, I guess it's true what they say
Gangtas make the world go 'round

[B-Real]
The only good bush is the one you fucked last night
Not the one who sends your brothers off to war and fight
You have smoked 'em M(a)r(i)es for the blind eyes and deaf ears
How many more years we accept lies, then cry tears?
They sell fears to the masses, just so they can justify all the fucked up factions
By elections, avoid any questions, give fake answers, Americas cancer
The little puppet with tangled strings
I think you forgot the value of a human being
Maybe he never knew or never gave a shit
But he can send us all off and do his bravery bit
Treatin' people like pawns for the checkmate for the campaign
Beggin' people "will you please reelect me?"
Get him outta here, you must learn
You're a fool if you want the fucker one more term
Get him out