>>> Quite late to the party at this point, but I want to respond...

>>> yes he say comment in sense of a salm pray trying to find words... 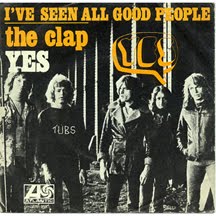 This is an anti-war song: The term "I've seen all good people" is ALL the people, including the so-called enemy.
The line, "Don't surround yourself with yourself" refers to self-righteous behavior; "Move on back two squares" is a chess term meaning to retreat and rethink your position. The lyrics also refer to the queen, which is the most versatile and powerful chess piece. It talks about how news is captured for use by the queen, which uses forces to take control and manipulate troops against the enemy. War is like a game of chess.
This song references "Instant Karma" which was a song recorded by John Lennon a year earlier.
The lines: "Just remember that the gold is for us to capture all we want, anywhere, Yea, yea, yea" refers to the rich and powerful victimizing the weak and poor. The US was taken off the Gold standard by Richard Nixon August 15, 1971 the same year this was released. (thanks, Mike - Mountlake Terrace, Washington, for all above)

Actually Michael, if you go to Yes' official website, you will find that it is in fact "goal" and not "gold" and it is "Instant Karma" not "Instant Comment". http://yesworld.com/lyrics/TheYesAlbum...
- Otto, Miami, FL

According to their own published lyrics, it says, "just remember that the gold, is for us all to capture". It also says "instant comment", not instant karma. It's in a Yes guitar songbook. Who am I to argue. MJ NYC
- michael, nyc, United States

Great song by Yes. I with I had seen them for the recent tour. That would have been cool. Didn't know the song's actually about war. I got the chess terms though.
- Stefanie magura, Rock Hill, SC

I really like this song. Probably one of the best songs ever.
- Savannah, Salem, IN

This song was played in the background of one of the previews for the Tim Burton film, Big Fish; however, it is not actually in the movie nor on the soundtrack.
- Christina, Ramstein, Germany

Yeah this really is a great Yes song. I saw Yes in detroit for thier 35th anniversery tour and I'll tell ya, they were spectacular. None of them have lost any talants due to the aging process. They were so rockin' and they made the whole experience unforgettable. They played this and it was extraordinary.
- Jonathan, Ann Arbor, MI

The actual line is " Just remember that the GOAL is for us to...it has nothing to do with Nixon or the gold standard. The song is simply about a chess game.
- Brian, Wilmington, DE

It does say "Goal", but it IS an anti-war song. If you listen closely to the harmonizing lyrics, you can hear the refrain "All we are saying is give peace a chance".
- Mark, Savannah, GA

Great Yes song. First hit in America, only using Your Move as a single selection. Nevertheless, a nice introduction to the band.
- Robert, Chicago, IL
I. Your Move
(Anderson)

Take a straight and stronger course to the corner of your life.
Make the white queen run so fast she hasn't got time to make you a wife.

'Cause it's time, it's time in time with your time and its news is captured
For the queen to use.
Move me on to any black square,
Use me any time you want,
Just remember that the gold (or goal)
Is for us to capture all we want, anywhere,
Yea, yea, yea.

Don't surround yourself with yourself,
Move on back two squares,
Send an instant karma to me,
Initial it with loving care
Don't surround
Yourself.

'Cause it's time, it's time in time with your time and its news is captured.

Quite late to the party at this point, but I want to respond to Michael's comment above. Unfortunately, the words and music within a guitar songbook are transcriptions by a third party, not from anyone in the band. Such books shouldn't be taken as gospel.

yes he say comment in sense of a salm pray trying to find words to make Friendly relation espiritual relation with god and is all right John lennon say give peace a chance is non sense to talk human been ... we eachother must talg to Jehova clam to it the king of eternity ... thanks read the bible and you love without yourself just in therms of this nice song dont soround yourself with yourself .... SORRY ENGLISH IS NOT MY ROOT LANGUAGE