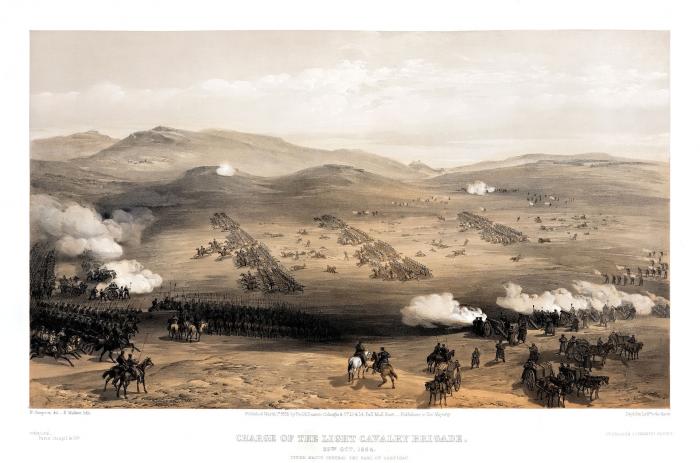 
This song is based on the Crimean War, which was fought by the Russians and the Ottoman Empire (England, France, and Sardinia). There are several mentions of the Russians such as, "The mighty roar of the Russian guns" and "When a Russian gets me in his sights." (thanks, Michael Olsen - West Hills, CA)

And as I lay there gazing at the sky
My body’s numb and my throat is dry
And as I lay forgotten and alone
Without a tear I draw my parting groan.

Well, great song as usual with Iron Maiden... To add a piece of information to those already given, this song is an obvious reference to the episode known as "The Charge of the Light Brigade", where British cavalry charged a whole battery of Russian artillery head-on. This was a terrible slaughter. It remains a most famous piece of the English history, and a rather uncomfortable one... Tennyson wrote a poem about it.

The music video uses clips from black and white silent movies portraying this event. It also opens with a scroll of text explaining the Charge of the Light Brigade. Iron Maiden's "Trooper" beer released by Robinson's Brewery uses the cover art of the single for the beer label and the story of the Light Brigade is on the bottle. "The Charge of the Light Brigade, which inspired the Iron Maiden Song The Trooper, took place at the Battle of Balaclava (1854) during the Crimean War when 600 British cavalry courageously charged the massed Russian artillery. This gallant but foolhardy assault resulted in a a massive loos of life and came about due to a misunderstanding of an order given by the commanding officer, Lord Raglan."