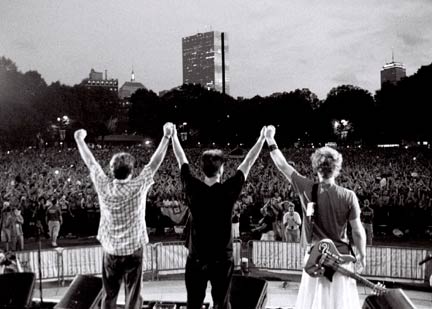 This song tells a story about a brilliant and battle-torn young general who has a dream in which he realizes the futility of war. He then attempts to persuade his men that they do not have to participate in the battle, but that he would fulfill the job he had sworn to do. He wants them to leave and live a full life, but none of his men will leave him. (thanks, Jim - Pittsburgh, PA)

When I first heard this song, it was at a service project program call Sierra Service Project, where a counselor sang it for us while accompanying himself on guitar. It seemed then, and it still seems now, that this song is religious in nature. The whole song to me seems like an extended metaphor for Jesus, or some other "savior"-type person. for the sake of simplicity, let's just say its Jesus. It seems to me that you could make the connection between Jesus and the General in that they were both respected during their times, and attracted a large following of dedicated "soldiers". In my mind, I see the general's choice to let his followers abandon him and fight the war alone is akin to Jesus's decision to sacrifice himself to save everyone who followed him. "Go now, you are forgiven." seems like Jesus forgiving us for abandoning him when he was crucified. This is just an interpretation I originally got from someone, and later thought about on my own. I'm not trying to make any religious statements here, so people of other religions shouldn't be offended. I'm just offering my own interpretation.
- chris, Long Beach, CA

Brian from lancaster...I guess I don't understand why you are so sure that the men did NOT leave...I'm not saying I agree with Billy from Cape May...But I see his point. The lyrics at this part of the song go: "But not a man moved, their eyes gazed straight ahead, Till one by one they stepped back and not a word was said, And the old general was left with his own words, echoing in his head, He then prepared to fight" Now there are several key factors in this part of the song that make me think that the men actually did leave. First off, the word "till" used AFTER the phrase "But not a man moved." This word "till" is generally used to express a contrasting action, and the contrast here would be at first they stood fast, but then one by one they left. The next factor would be in the phrase "one by one they stepped back." The phrase "stepped back" used in association with a fight is not usually indicative of the person or people doing the "stepping back" then staying and fighting. In the next line, "the old general was *left* with his own words echoing in his head," I believe that when it say the general is "left" with his words, it means that is all the general is left with after his army leaves. This is then followed by the words "echoing in his head," the word "echoing" usually being assosciated with solitude. Finally the last factor is a subtle intimation made in the next line "*HE* then prepared to fight." Where before it has kept talking about the general's men, and his army, and their actions, here it just mentions the general, it only says the "He" prepared to fight. If all the men stayed and were going to fight, why not say this? Why would the band choose to say just "He." They could just have easily said "They" while maintaining the same sylable count. If that was unsatisfactory because the wished to keep subject coherency (the general was the subject of the last line), they could have said "His army then began to fight" or "He and his army then began to fight." And although this might not have kept the same number of sylables int he line, I believe that one of the unique things in this song is that it does not try to have a clear sylabic rhythm, but is rather inconsistent in an artistic way (refer to the line with "And it was a gray morning and they all wondered how they would fair" and "The general said he would do his own duty but he would extend it no further" where it is clear that there are superfluous sylables). Now I am not neccesarily saying that they didn't leave, or that they did, but I am **sincerely curious ** brian from lancaster why you are so sure they DID NOT leave with all that I have said apparent in the song? Any others with views on this issue please comment, I am anxious to hear opinions, because I believe under this lies the core meaning of the song, and I am unsure as to what they do...
- Jack, NOVA, DC

Billy from Cape May...your post should be taken down because all you are doing is ruining and confusing the interpretation of this brilliant song for people. The men didnt step back because they weren't going to fight. They stepped back because they were staying to fight. Thats why the words echoed in his head, because all of his men now knew that they were going into battle with a man who didnt believe in the fight. The song gives us no answer, just compelling arguments for both sides. We must determine what is right for ourselves. the song does seem to be weighted a bit toward the general's pov though. bam.
- brian, LANCASTER, PA

"elias" is about a man Chad, a member of dispatch, met during his stay in Zimbabwe, Africa. go to www.eliasfund.org for more info Hope I could help
- thea, litchfield , CT

ahh wait the last comment was me too, i just read it and its really confusing. during Chad's stay in Zimbabwe, he met a man named Elias and his sons, Honest, and Manuel who lived in a part called Sector 17. They grew close during Chad's stay and promised to stay in touch. However, after Chad returned to the US he learned that he could not send mail to Elias and his family because of Import/Export laws. So he did not know how Elias was doing (if he was still alive). This is referred to in the part of the song htat says If you die will I get word that you're gone? will I hear it in passing conversation? will I stop short and fall to the ground? Distance is short when your hand carries what your eye found. the first part is in one of the languages spoken in Zimbabwe, and hte second part is in english (obviously). wellll i hope i helped. still please go to http://www.eliasfund.org for more information and information on how you can help save Elias and his two sons.
- thea, litchfield , CT

I guess we all agree is a great song. I was looking for any posts on Elias though, which seems quite less obvious and very meaningful as well. Anyways, I was also wondering about the band, is known in the states, but outside is mostly never heard of. The albums were released in a short time and for their music being as good as it is, especially in the lyrics makes me think these are just a bunch of guys who realized they were ready to do something great, did it, and now is over. I'd like to do some music as well just as something that i can get thru, not that i'd would stop listening or liking music, but just letting other people hear it and make sure is the best i can give as well.
- Fernando, Asuncion, Paraguay

Read Killer Angles by Mike Shaara, its about a famous general, this song is based on that event right as the south was trying to take a hill where the north had an elevated posisiton and it was suicide and told his troopps it was suicdie, so go read KILLER ANGELS by MIKE SHAARA if you want the meaning... peace jeff
- Jeff, Boston, MA

I love this song, and this is honestly one of my favorite bands. I was disappointed, though, to find that the only song here was The General. Nevertheless i love this song, but as stated above this song is self-explanatory. I wanted to find the meaning behind Open UP, considering my friend and I both have what we think it means. Other songs that would be nice to find the meaniongs of would be Elias(my favorite), Two Coins, Flying Horses, Hey Hey, Headlights, the list goes on... No matter what though, anyway you look at it, Dispatch is an amazing band with amazing lyrics, spirit, and meaning to all their songs.
- Katie, Basking Ridge, NJ

I definately agree that the General is one of Dispatch's more comprehensible songs, but all of their songs are amazing. I would't mind an explanation for some of them such as lightening, bang bang, elias(maybe a translation), and prince of spades. Any thoughts anyone?
- Ann, Louisville, KY

Dispatch played their last concert ever at the end of the summer of 2004 in Mass. It was a free all day event. I really wish they would have done a short tour so that fans from other parts of the country could have attended. One of the most creative and harmonic bands of recent times. Just a great band to listen to.
- Grant, Baton Rouge, LA

Brilliant song. Brilliant band. They just broke up, because they didn't feel musically creative, anymore. the General is one of their most-known songs...though I would have to say that Two Coins, Bullet Holes, Flying Horses, Elias, Hey Hey, and Bang Bang are higher up in my book than this song. I love it, though.
- Meg, Worcester, MA

Even though this is far from one of their best songs, Dispatch is an amazing band and this song is still great. I think the lyrics are pretty self-explanatory, though I found it sort of surprising that they wrote a song like this since this song is much less abstract than most of their other songs. I think there was a mistake in this description, as the men do eventually leave him after some hesitation("Till one by one they stepped back and not a word was said/And the old general was left with his own words echoing in his head.) I think the most meaningful part about this song though, is that the general himself stays to fight, because he realizes beyond fighting his life has no other meaning, and he has wasted his entire life, so he decides to basically kill himself.
- Billy, Cape May, NJ

Rhetorical Analysis of a Song- "The General," by Dispatch
There was a decorated General with a heart of gold
That likened him to all the stories he told,
Of past battles won and lost
And legends of old
A seasoned veteran in his own time

Not a man moved their eyes gazed straight ahead,
Till one by one they stepped back and not a word was said
And the old general was left with his own words echoing in his head
He then prepared to fight