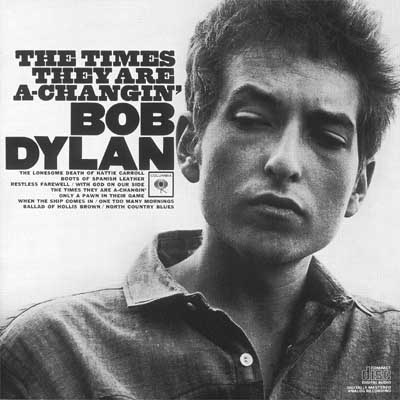 "North Country Blues" is a song by Bob Dylan, released on his 3rd studio album The Times They Are a-Changin' in 1964.

Its apparently simple format (ten verses of ABCB rhyme scheme) and subject matter (the run down of a mining community) appears influenced by Woody Guthrie.

The song opens with a deliberately conventional opening (Come gather round friends and I'll tell you a tale...).

Each verse contains at least one tragic event, and Dylan hides the fact that the narrator is a woman to the end of verse 4 (and my school it was cut as I quit in the spring, to marry John Thomas a miner.)

The song ends bleakly (My children will go as soon as they grow, for there ain't nothing here now to hold them).

Within this apparently restricting and morose format, referred to as a "formally conservative exercise in first-person narrative"[1] Dylan manages to achieve significant tonal and expressive variation, and the song is considered by some to be one of his most effective in the 'folk-song' genre.

en.wikipedia
Come gather 'round friends
And I'll tell you a tale
Of when the red iron pits ran plenty.
But the cardboard filled windows
And old men on the benches
Tell you now that the whole town is empty.

In the north end of town,
My own children are grown
But I was raised on the other.
In the wee hours of youth,
My mother took sick
And I was brought up by my brother.

The iron ore poured
As the years passed the door,
The drag lines an' the shovels they was a-humming.
'Til one day my brother
Failed to come home
The same as my father before him.

Well a long winter's wait,
From the window I watched.
My friends they couldn't have been kinder.
And my schooling was cut
As I quit in the spring
To marry John Thomas, a miner.

Oh the years passed again
And the givin' was good,
With the lunch bucket filled every season.
What with three babies born,
The work was cut down
To a half a day's shift with no reason.

Then the shaft was soon shut
And more work was cut,
And the fire in the air, it felt frozen.
'Til a man come to speak
And he said in one week
That number eleven was closin'.

They complained in the East,
They are paying too high.
They say that your ore ain't worth digging.
That it's much cheaper down
In the South American towns
Where the miners work almost for nothing.

So the mining gates locked
And the red iron rotted
And the room smelled heavy from drinking.
Where the sad, silent song
Made the hour twice as long
As I waited for the sun to go sinking.

I lived by the window
As he talked to himself,
This silence of tongues it was building.
Then one morning's wake,
The bed it was bare,
And I's left alone with three children.

The summer is gone,
The ground's turning cold,
The stores one by one they're a-foldin'.
My children will go
As soon as they grow.
Well, there ain't nothing here now to hold them.