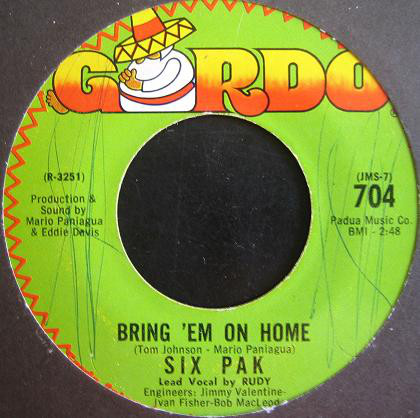 Double-sided Vietnam War single by Chicano soul group Six Pak, released on the Californian label Gordo (# 704), founded by Eddie Davis (a sub-label of his Rampart Records). Both tracks had a Latin Soul feel to it - of course, the label focused on Mexican Americans.

This formed part of the West Coast 'Eastside Sound' music scene. According to the president of Rampart Steven Chavez: "almost 50% of the artists from the East Side Sound era served in combat roles in Viet Nam, losing their innocence to a war in the prime of their youth, and returned to a changed American music scene that pretty much turned their back on them with the advent of new genres like hard rock, heavy metal, punk, disco and the like".

Firstly, the group covered the song "Weep No More", originally released by Nathan McKinney in 1964, and written by Len Johnson. This version included a great electric guitar plucked throughout the track, strong organ, and group vocals. The label credited "Stevie" as the lead vocalist.

The track "Bring 'Em on Home" leaned on the anti-war side. It also dealt with the draft. The narrator had been called up by the "board", and he wanted the government to end the war "before it's time...to go there and fight". He encouraged those who were "busy" or "afraid" to take a stand against the war. Written by Tom Johnson and Mario Paniagua, with the lead vocal by "Rudy".


Ancora una volta ho tentato di completare all'ascolto il testo parziale ma ci sono delle parti mancanti segnalate da puntini di sospensione e punti interrogativi.
One by one, numbers are called
You know my birthday is on the list
I was just thinking
about it and then (?)
but the board went ahead
and take ...

Bring 'em on home
Before it's time,
before me should go there and fight

They gave me a knife and a gun that shoots,
they told me what they want me to do
Kill a commie in the name of Christ
I just told them
I'm keeping...

Bring 'em on home
People too busy to realize,
others afraid to criticize